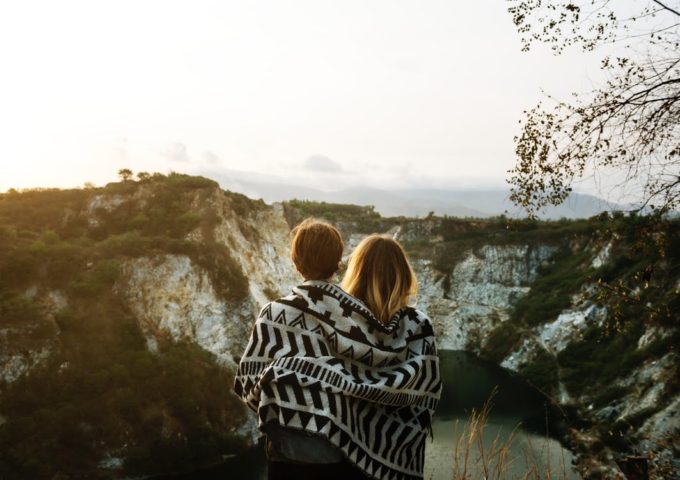 ‘Meg, have you heard? …’, Mrs Jones beamed with her latest edition of neighbourhood gossip. I realized that she had been talking to me for some time now. So why couldn’t I hear her earlier? Instead I could only hear a strange incurable voice inside my head that made me chuckle every time Mrs. Johns said something hypocritical.

I was hearing this voice for a month now, at different occasions and with different people. Was there a sardonic spirit inside my ear? I had thought of showing myself to the otologist.  But then that was before I started having so much fun with this spirit’s commentary.

I decided to give this wry voice inside my head a name. Lucy.

So Lucy and I tuned into what Mrs. Jones was saying.

‘ ….It hasn’t even been a day since Mr. Moon left and ….as I was on my morning walk, I saw them…this man in stripped blue pajamas sneaking out of Mrs. Moon’s side door ….still locked in her arms…bending over to kiss her repeatedly……at first I couldn’t figure it out…’

Lucy spoke inside my ear ‘…Who are you kidding Mrs. Jones? Of course you figured this out , you scandalmonger, long before it happened, hoping all along that it would happen ……the entire hot sordid affair…that would liven your days with a reason to delightfully and purposefully spy on your neighbour …..’

Mrs. Smith had joined us and Mrs. Jones stopped talking.

Mrs. Smith adjusted her large bums to fit within the frame of the upholstered chair and then rounded her lips to form her sentence. It was Mrs. Smith’s turn now. And I dreaded what Lucy had to say next.

‘Oh! there is so much work for me as the Chair of the Events Committee you know …..I have to attend evening events at the museum and…’

‘Hadn’t you not hankered for this position with a perk of public attention?….Wasn’t this the break you had been aching for , if for nothing more important,  than to wear the assortment of cheap evening gowns that you have collected? And I hope that next time you remember to remove the tell-tale tag of the thrift store on your attire ’.

Lucy stop! I cupped my ears. She was ruthless. I looked up to see if Mrs. Smith could hear Lucy. But luckily, not.

I made my excuse, picked up my coat and walked out into the cobbled street. I needed was to fetch Sparky from his spa, hug him for a long time and wish Lucy away . As I entered the Doggie Spa, a plumb, blonde receptionist smiled excitedly.

‘ Sparky was such a good boy, so easy to manage with short hair….so disciplined through his bath and grooming…’

‘ Ah ha! You silly goose! You are spending seventy dollars on a dog’s bath when you could easily do this at home? Are you a waster or just plain lazy…’

Lucy didn’t spare anyone. Not even me. I gave Sparky that long hug. But Lucy still hadn’t left.

With Sparky’s leash in one hand and my scented pink poop-bag in the other, I made a decision I should have made a month ago. On the way home I decided to stop by at the Otologist.

But Sparky, had his own little plan laid out. He pulled me to an adjoining trail and into his favourite socializing hideout, the leash-free park.

‘No Sparky!. We don’t have time for this..’. After glaring at me with those green eyes for a few seconds, Sparky soon realized that I meant what I was saying. So he decided to do the next best thing.  As I picked up his gift in my pink scented poop-bag, from the corner of my eye, I saw a large dog doing his business too. The rather tall and scruffy owner was looking at me through his glasses. Realizing that I was watching his next move, he reluctantly pulled out a black plastic from his front pocket and scooped down.

Lucy was on a roll. ‘ Do I have to tell you what would have happened if he was not being watched ? How nice that there is a $500 sign for not picking up…’.

Bravo Lucy, for once you said what I wanted to hear.

The Otologist dropped two drops of cold sticky liquid down my eardrum and said, ‘ It’s an inflammation’.

Lucy laughed, ‘ I would rather be called sexy than an inflammation!’.

With Sparky and Lucy I made my way back. My heart leapt as it always did at the sight of Rick, my bachelor neighbour, the handsomest man I had ever seen. He was leaning against his door talking to someone on his cell when I walked past him to reach my house. I dug my hand into my purse fumbling for my keys when I suddenly smelt musk and sweat. I turned around to face Rick grinning broadly. I could no longer feel my feet.

‘ Here, let me help you..’, he took the leash of a rather annoyed Sparky in his hands while I took out my keys.

Then I turned around to ask if he’d like to come in.

He winked and beat me to it.

‘ Are you doing something tonight? …….the Toronto Blue Jays are playing …we can watch the game at my place… say 7 pm? .’

Before I could accept, his phone rang again and he walked away.

Lucy was quick with the guillotine, ‘ A man who doesn’t wait for a response or wears the same clothes that he wore last night when he left with those girls , is a man not worth …’

Oh how I hated Lucy. This time for being so apt.

The next morning, I got up feeling completely refreshed. But a quick look in the mirror showed that my dark circles hadn’t vanished. I waited for Lucy’s rebuke. It didn’t come. Had Lucy vanished instead?

Over a cup of coffee I flipped through the newspaper.

A leader of the free world who was known for his contempt for women, tweeted on International Women’s Day, ‘ I have tremendous respect for women….’

Why had Lucy not reacted by now? I could have done with Lucy’s razor wit here. Could it be possible that I was missing her?

Oh, never mind, who needed Lucy. I could do this myself. Now let’s see.

Surely this statement was a misprint. What he meant was, “ I have tremendous disrespect for women…” Ha!

The morning rays pumped a new sense of confidence in my cynical abilities. I was amazed at my capacity to cut through the irony and duplicity of life.

But wait, was this really me? Was I my own sardonic friend, my own alter ego ? Or was it that Lucy was back ? I had to check. I had to know for sure. So I called out to her.

Yes she was back!

‘Meg did you know, a strange thing has happened’

‘I have decided to stay’

For some reason that only god knew, my heart soared.

‘And Lucy, another stranger thing that has happened?’