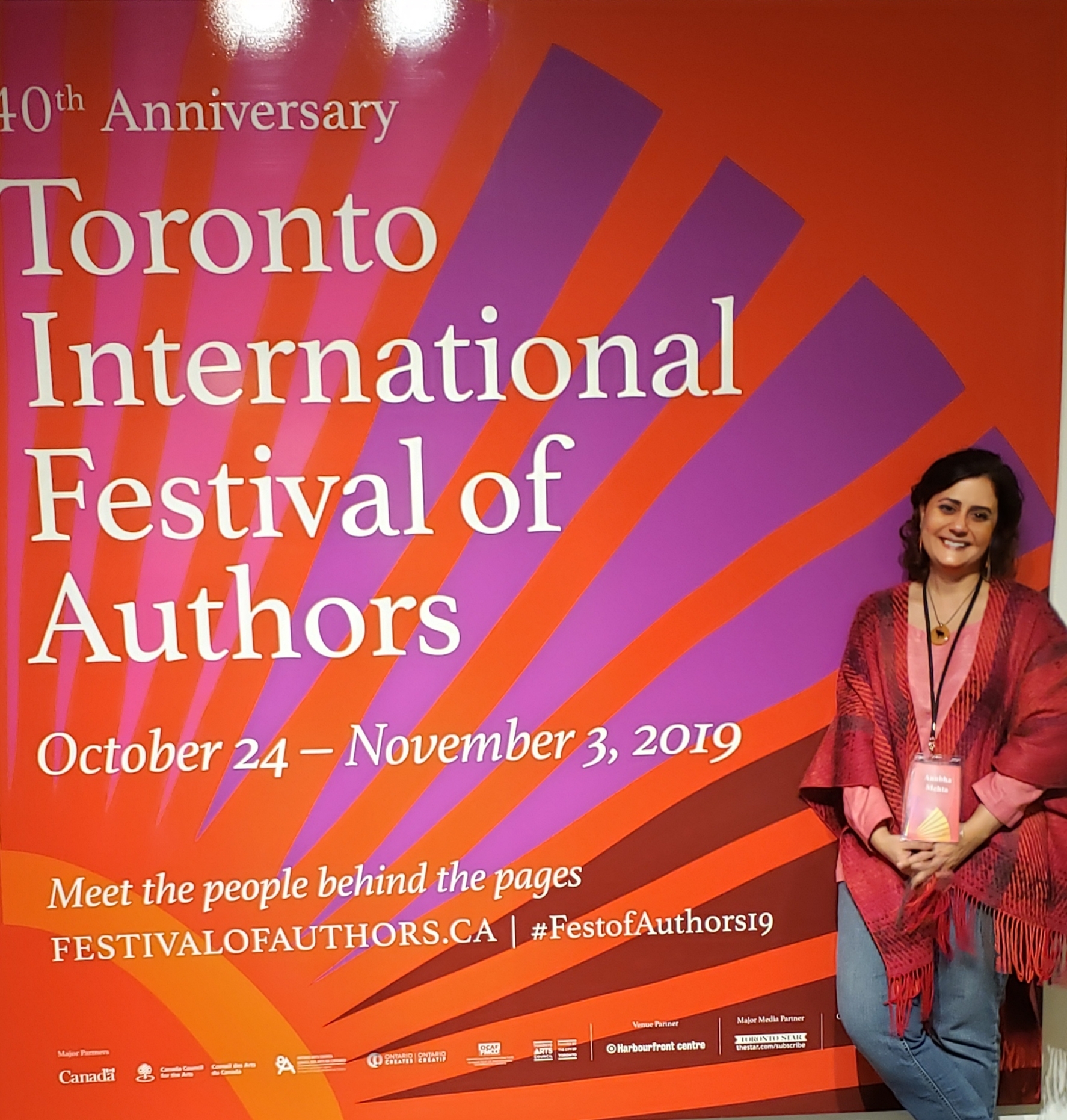 As a writer this question has plagued my consciousness for eternity.
The insatiable curiosity that could never be quenched, the independence of mind and spirit that saw no border, the rage at things that would not budge , the ways of seeing that could not be compromised , the raising of heads only to be chopped down repeatedly , the fearlessly writing without reverence to the status quo , the stubbornness of sticking to convictions, the habit of questioning and re-imagining everything till it made sense to sensibilities that were not very commonplace.
What has brought me closer to this answer was an experience as an Author-Delegate at Toronto International Festival of Authors (TIFA) where I had many learning moments filled with introspection, cynicism and revelation. Something fundamentally changed inside when I was both consoled and inspired in the realization that I was not alone in my struggles and uncertainties. As I sat though these thoughtfully curated sessions, I understood that every hesitation, fear, perplexity and deficiency that I thought was uniquely mine, was quite prevalent within this hood. Even iconic author’s hearts had been broken with rejections, stoned with a writer’s block and torn with doubts about the purpose of their writing. But they had stood up and it was in this act of rising and persistence that separated them from the crowd. Moreover, these acts of courage took on a whole new meaning on a stage that voiced stories of the underrepresented, subjugated, nameless, diverse and invisible. How different we all were in our worlds and worldviews, and yet how connected we were in our anguish, strife and triumph to tell stories that were greater than us and would live longer than us.
Here are some of the sessions that I attended that provided these central messages that I now share with you:
Why is a writer wired differently?

A writer can see everything. They see underneath the surface and learn from situations, jobs and predicaments. But it is in the interpretation of their view that wires them differently. On the opening night two New York Times bestselling crime writers took centre stage, Don Winslow in conversation with Linwood Barclay. Don, a former investigator, antiterrorist trainer and trial consultant, said that his stories were from his own life. He started his writing career from a small tent in Africa where he was selling safaris to tourists and has ended up selling his multi-million-dollar scripts for the big screen . 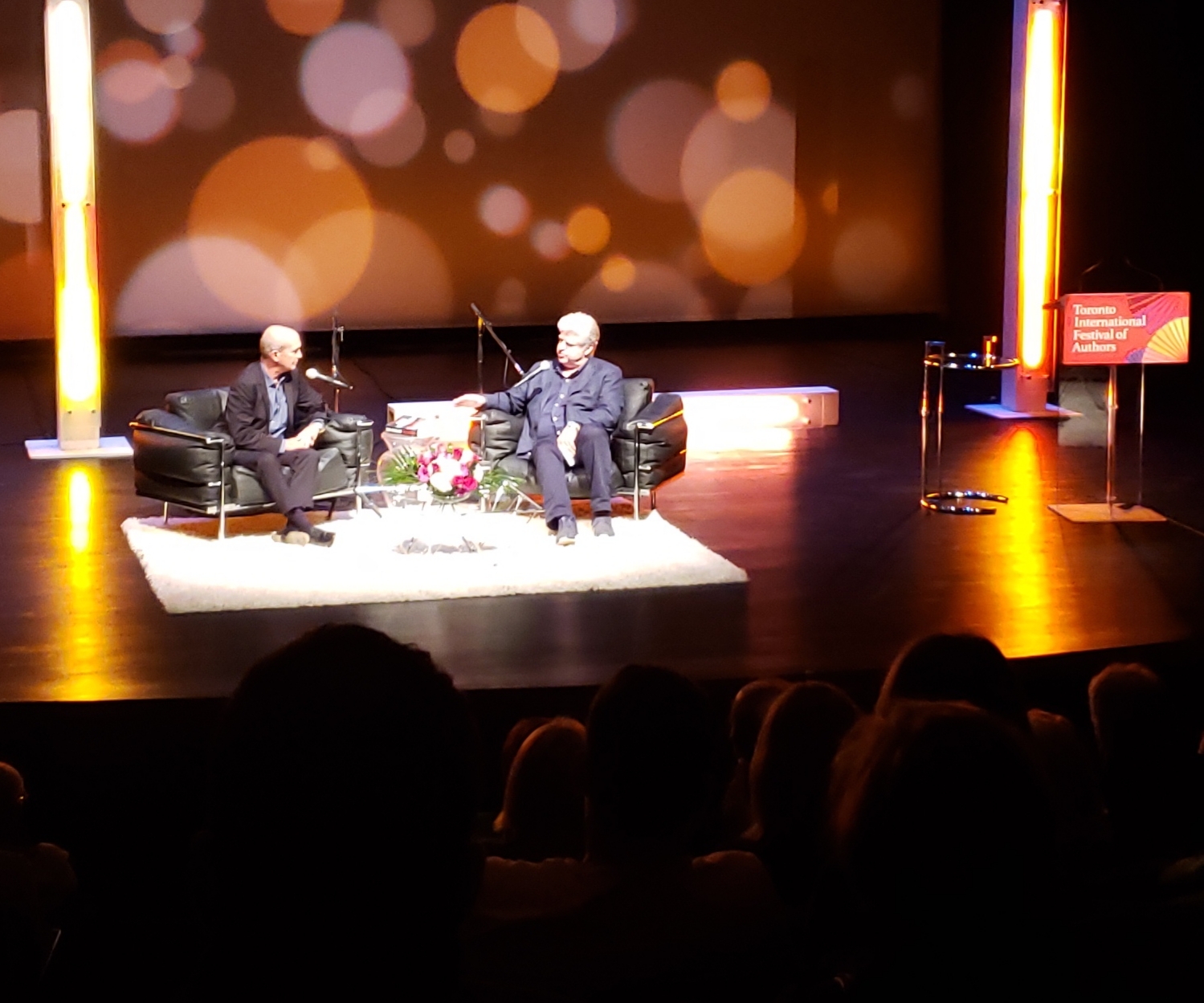 Don talked about how the dangers of undercover work made him question the greater good of the jobs he was assigned to do – from being a prop for cops in drug deals at New York’s Times Square, rescuing teens from the streets to developing the Stockholm syndrome. So, what made this American crime writer tick? ‘ Writing about the max, the driving-diving culture’, he said. This session answered many of the central questions about how our wiring takes us immediately to sub-cultures. Cynicism and deep thought drove a major part of Don’s wiring. North America is the richest continent in the world, yet they are the largest users of opioids to get rid of pain. What pain does the richest continent have? Whether transnational corporations at the top were legitimate or not, in the end they all functioned like and became cartels. The jails had become de facto deaddiction centres in this opioid crisis. People become statistics and stereotypes under labels that become their reality – like immigration and the heroin epidemic. This has made Don re-think on the benefits of not legalizing drugs and rethink from ground-up on this un-winnable war on drugs. Illegality has made drugs highly profitable and places law enforcement in an impossible situation. Dirty money goes everywhere, across the borders and then comes back to us. It cannot be counted, it has to be weighed. Don calls his books his ‘temper tantrums’ and there are many perils of writing fiction, most of all when reality becomes surreal that it is difficult to make it believable. We as writers are wired to ask questions that matter, the correct questions in order to name and describe crisis and war fearlessly. We are wired to ask the how questions but writers really need to ask the why questions. Don’s greatest influence was a sailor dad who loved to read and a librarian mother who loved a sailor!
When asked by former Ontario Premier Bob Rae, on what wires writers differently, David Adams Richards, one of Canada’s greatest writers, replied that writers have a knack of turning their encounters from real life into stories and it is his writing that has kept him alive all these years. His writing gave him provocative insights and the courage to look beyond society’s most perplexing subjects of killers and victims, into love, travel, history, family and nature.
Is Fame a four-letter word?

We have all heard this phrase ‘ Authors Die In Poverty’. Well, these days, perhaps not so much. With the expanded horizons of subject matter of stories in an inter-connected world and with published stories reaching every one’s living rooms electronically, the writing-publishing industry has become lucrative for many. And with money comes this four-letter potent phenomena, Fame. In a world of virtual reality, to be of literary success, is to be famous. Two award winning authors, one veteran and the other emerging, Adam Foulds and Amy Jones, both shared their personal journey’s of dealing with this associated and sometimes unintended consequence of being successful.

This session validated many of my fears and learnings as a writer. Most of us writers, are hesitant to reveal our private life publicly, to avoid a fetish on our personal world- mainly due to fear of slander. Yet when I started out on this journey of being an author, I was explained about the pre-requisite of ‘branding’ in grave detail. And at that time my first reaction was, ‘ What? Like cattle?’. And I was told that it was the opposite of that, it mean 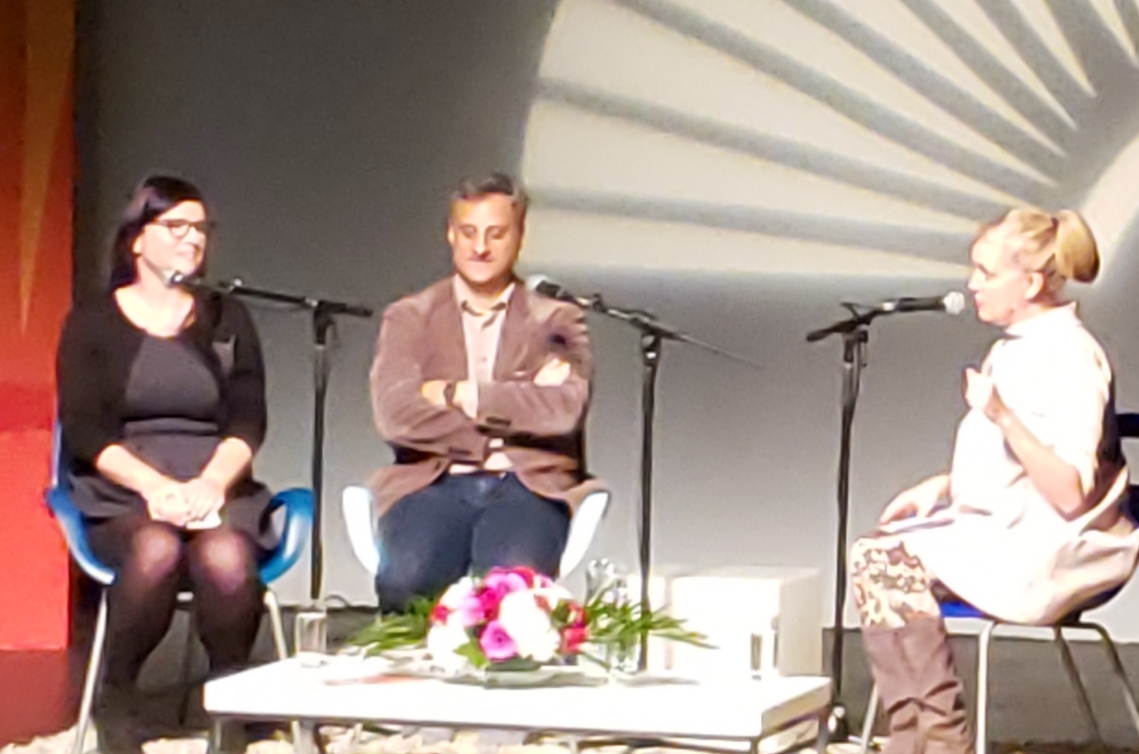 t marking your persona with an electronic imprint. The metrics of fame dictate those who are seen or ignored on social media and in real life . For fame has many heads. It manifests itself in many avatars. This panel spoke about the neurotic material feeding a dark psychology of celebrity-status with social media as the powerbroker. In their books the two authors talked about the seduction of fame’s darker side as a necessary by-product of a celebrity status. There is both a grandiosity, a fulfillment as well as a hollowness when one is seduced to live under its signifiers and become symbols of one’s own making. We become nothing more than our own image and we last as long as our image lasts with our fickle sycophants or haters . And this hyper-activeness of the world of social media has reached epidemic proportions affecting every aspect of our lives. They spoke about the cult-like-branding of movie starts and singers who lived in their inner dark worlds of rage and psychosis. With each new virtual, artificial space of friendship that one creates online, a deeper, more insidious space of pain and isolation is created simultaneously as our senses are tricked into believing that our human connections are genuine and real.

Was it really pre-ordained that one would not make it as an author in this ruthless, competitive and commercial world with a small press ? This was the initial impetus that led me to attend this session. But I was surprised on how much more I learnt. Kate Siklosi, who is the co-founding editor of Gap Riot Press, a feminist experimental poetry small press, moderated a panel with: Rob McLennan founder of the chapbook press, above/ground press; Stuart Ross , a small press activist, founding member of the Meet The Presses and his micro-press, Proper Tales, is in its 40th year; Dani Spinosa, the Managing Editor of the Electronic Literature Directory and co-founding editor of Gap Riot Press; Terese Mason Pierre, an organizer and author, with her chapbook being released with Anstruther Press. 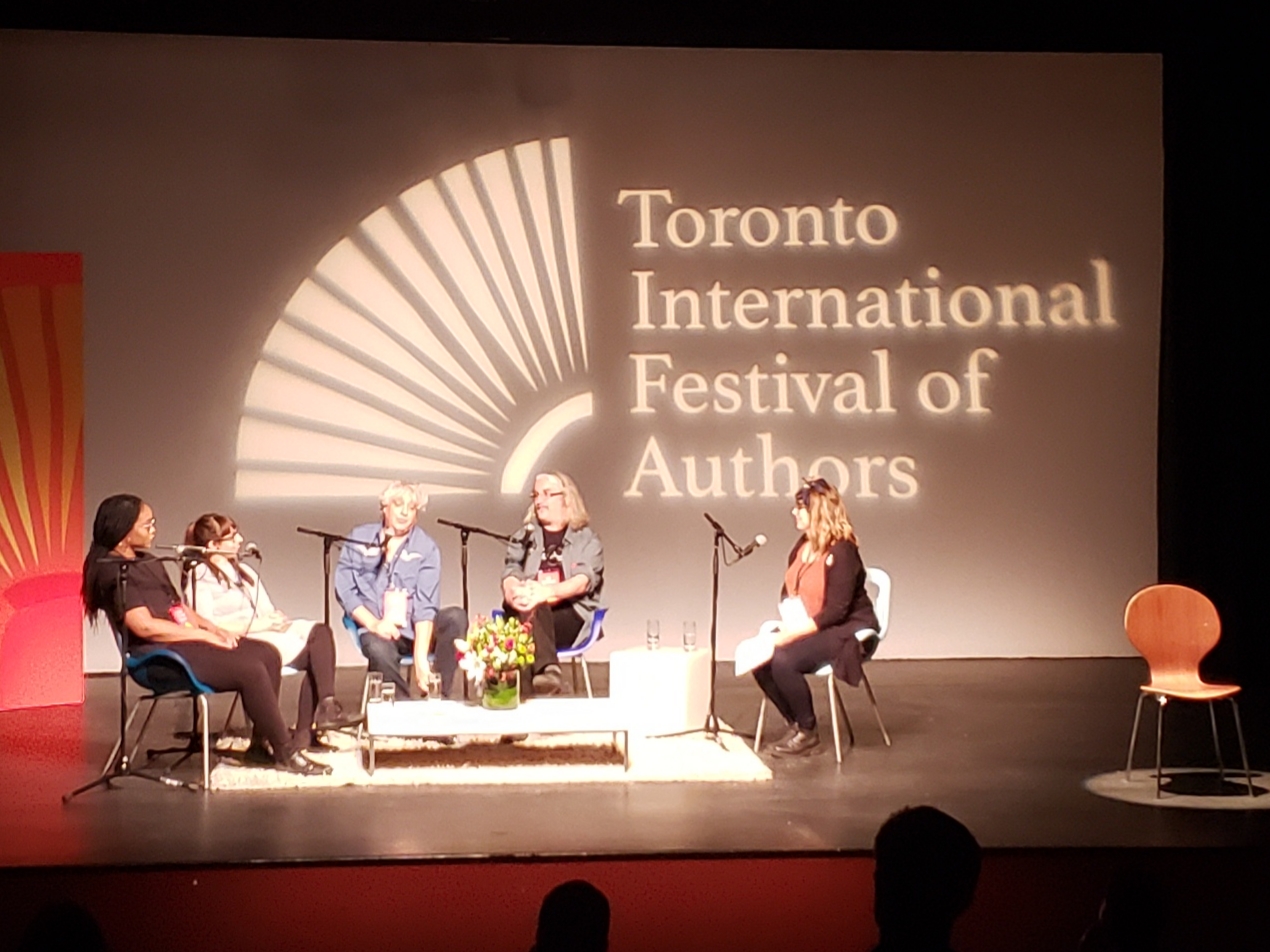 When asked why they do what they do and how do they survive, the panel answered that they have the freedom of building a community that they aspire for. This was a community in which they can give a voice to the voiceless, a space to the invisible and power to the under-represented and the divergent. They took on experimental writing and can build a community of all levels of writers – emerging and established. So, how are they able to do this? Because small press has survived beyond commercial forces by by-passing regulations that dictated larger conglomerates , of the funding gatekeepers and by sustaining an economy of partnership, sharing, almost like a barter system. Authors are invited to watch their books get printed and collated. They grow organically through word of mouth, social media, email subscriptions and specialized small press markets. Small press is a-political, almost a collaborative, anarchist, with a DIY element to it. They cater to smaller niche markets, genres and tastes and even house limited edition books. When asked about connections between curation and community building, they said that for them curation means selecting and not seclusion.

Why should we care about stories from another continent and another era? The brutality of British colonialism on South Asia lives on today, even after 72 years. Where better to host a debate than @tifa with authors from the three traditionally adversary counties that have internalized this violence forever – India (Aachal Malhotra), Pakistan ( Haroon Khalid & Aman Zakaria) and Bangladesh (Nadeem Zaman). Powerful stories were told through memory, history, objects that symbolised human greed, dehumanization, displacement, vengeance, hope, resilience and redemption. 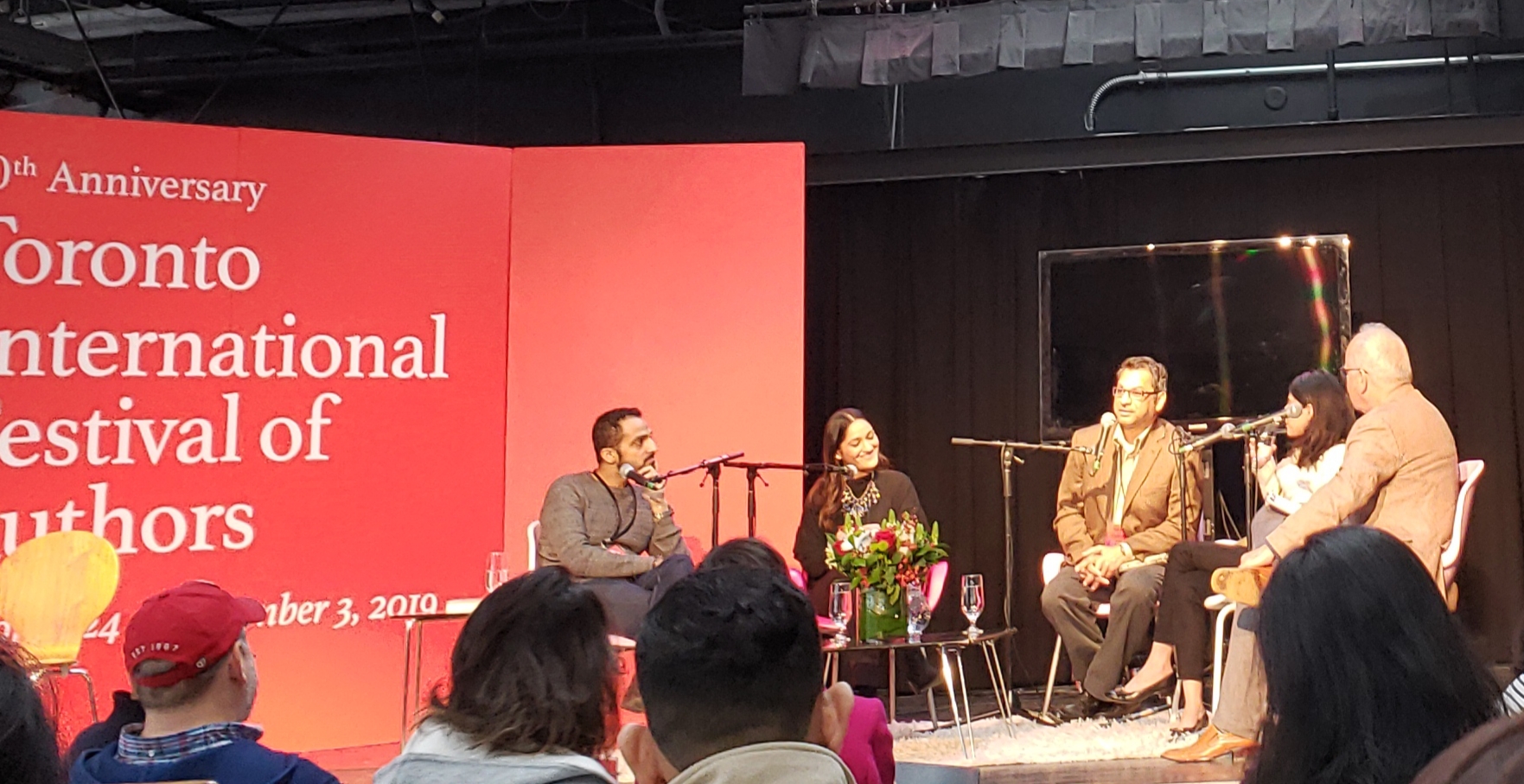 Fourteen million people were displaced in the Indo- Pakistan partition of 1947 and they are not just numbers. They share a powerful history of shame, fear, denial and sadness that defines the ideological lens that shapes South Asian politics and the world today. And as Daniel Lak, Canada Correspondent for Al-Jazeera English, and the moderator quoted to me in a personal interview – “ I would say Partition is the great unhealed wound of South Asian history and its relevance can be found in the daily hostilities between India and Pakistan, two nuclear weapons states that have fought major and minor conflicts for the past 73 years, displacing, injuring and killing millions — probably more than in the actual events of Partition itself. It’s also an unhealed mental and emotional rift in many families and individuals. Until there’s sustainable peace, good relations and hopefully a Truth and REconniclillation process, Partition will remain all too relevant”. 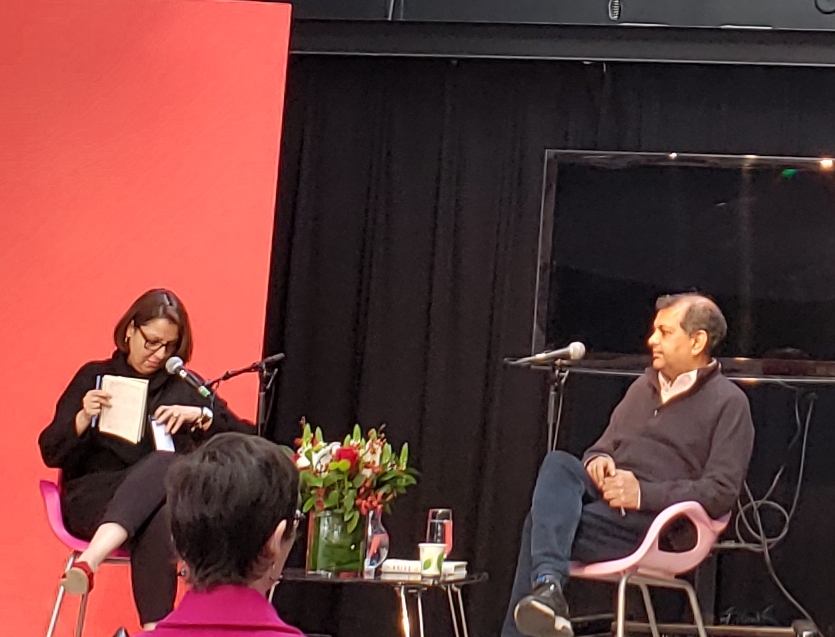 Human being are an immigrant race and no border would stop them from travelling. The business of visas is only a recent development. In the early nineteen century a quarter of Europe moved to North America and a quarter of the world today lives in a city which is not of its birth. But today most of America feels questioned on the land that they live when they are called termites, robbers, rapists and vermin. People move not because they hate their countries but because the rich western nations have stolen the future of the poorer nations, their climate, money and opportunity. This book is a small answer to an era where mainstream media broadcasts populists who tell fake stories so well, that it has a direct co-relation on the treatment of immigrants.
So what happened when eccentrically brilliant writers from all over the world combusted for eleven days with ideas, stories, beliefs, curiosity, convictions and books in one of the most diverse cities of the world? Canada’s largest and longest running festival of words and ideas happened. TIFA happened.

Yes we writers are wired differently and I guess lit fests like TIFA are the electricians that plug us into sockets to light us bright in our different colours.